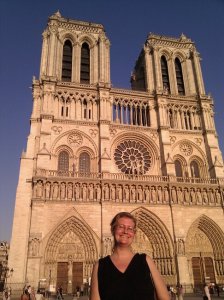 Marilyn Vix in front of Notre Dame on her last trip to Paris, 2010.

I watched you burn yesterday. On Twitter. From the many people that took video standing in the streets in disbelief. I watched with horror, with them, as I saw the flames claw through your roof, take down your steeple, and rampage through the interior. It hurt to watch. And the ache won’t go away.

So, I thought I’d write a love letter. Of the memories coming back to me as I lived in Paris so many years ago. When you, Notre Dame de Paris, were my refuge from the world and brought peace of mind when I needed it.

You’re so much more than an archive of history, though that is one part of you that is important to remember. So many events have taken place within your walls. Mary Queen of Scots married Francis II inside of you. Napoleon crowned himself under your roof, and the relics of the Crusades rested as treasures of the church in your care. I remember looking at them for the first time in “ahh”.

In 1992, I lived in Paris for three months through a local college’s Paris abroad program. It was the experience of a life time. In the beginning, I would go and visit you, whenever I had the chance, just to remind myself I was living in Paris. But later, as the novelty wore off and I was starting to even get a Parisian accent (I’ve been told my French has that quality to it), I started to visit just for the peace of mind. To think. To walk around and go through the arches, sit at the pews for the quiet. I would get out of the constant stream of tourists, and sit in the middle, with my thoughts. Yes, even prayed sometimes, since I was a young girl of twenty-six on my own in the world at the time.

My favorite place was near the altar of Mary, near the center of the dais nearer to the South Rose Window, where the statue of her stood. There was something special about praying to Mary, as if she wasn’t just the mother of Christ, but of us all. I wonder if the statue of Mary survived. There were reports of the artifacts being saved, the Piece of the Cross, the Crown of Thorns, many of the paintings being carried out to safety. I hope they were able to save her too.

I’d light candles for loved ones that had passed, always making sure I’d give an offering. And it was in francs, because it was before the euro. I do miss the huge amount of yellow coins, centiemes, that you’d end up with after spending francs. It was the French version of pennies. Using Euros around Europe doesn’t feel the same. I liked how different money systems gave Europe character.

I’d go to the free organ concerts. They were the perfect price for a student. I remember sitting on one of your tall pillars, finding the only seat to be on the base. The hard, stone giving no cushion as I sat. But the thought of the hundreds and thousands of people that had maybe passed and been by this pillar. In that moment, I could hear the organ music, gothic and booming through the cathedral, as it should be. As it was written for. The sound of trumpets of angels, and sometimes maybe even like God himself, booming back through the arched stone ceilings above me. 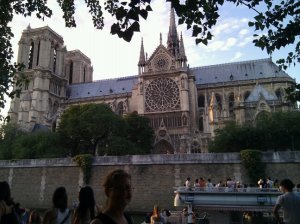 Picture of Notre Dame on the other side of the Seine River. Picture taken by Tiffany Turner, 2010.

I saw you last around 2010. I walked through the corridors, looked at your windows. I took the side view picture of your expanse across the Seine, and the obligatory tourist shot outside. The light was perfect, with a recent renovation having cleaned the whole of the towers. They were spectacular. I didn’t know it was going to be our last meeting. I wish I had spent more time inside.

But the news is that your structure was saved. You will be rebuilt. Like a phoenix, you will rise from the ashes of the medieval construction that doomed you today. A new forest will be cut and fitted into place. A new roof will be raised. The stones will be cleaned, renewed and repaired so you will rise again with a new spire to reach for the heavens. But for now, we will miss you. Miss you until you open for the masses again.

I hope I am able to make a trip in ten or twenty years and hear on the tour about the fire of 2019, that destroyed much of the interior. I’ll remember the music from the organ. The hard stone of the pillar. Hopefully, there will be a new Mary statue to look at as I sit on a pew, and be glad that you are back to your glory, restored for others to visit again.

Good bye my old friend, for now. I’ll know that you’ll welcome other new students that are abroad to enjoy the peace, serenity and history that is within your walls. Soon. Soon. All we have to do now is wait. Until then my friend Notre Dame de Paris. Adieu.