Available at Amazon.com, Barnes and Noble.com, and Allromanceebooks.com.

I woke up to find the best email today. Never Marry A Warlock is being featured on BargainBooksy.com today! And this is no ordinary feat. They hand pick the books they want to feature on their site. I am so excited that Never Marry A Warlock made the cut and is up and featured today. To celebrate, BargainBooksy.com has given me a badge to display for future bragging. 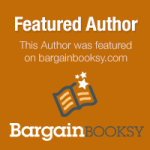 It’s a great way to celebrate the massive amounts of fun I’ve had over the last year. I want to thank everyone that have read the Beware of Warlocks series. Number 3, Never Cross A Warlock, is in the first draft phase right now. I’m hoping for a release in the Fall 2014. Meanwhile, stand tuned. There is a blog tour in the works for Never Fall For A Warlock, and more details will be revealed of the final spell battle.